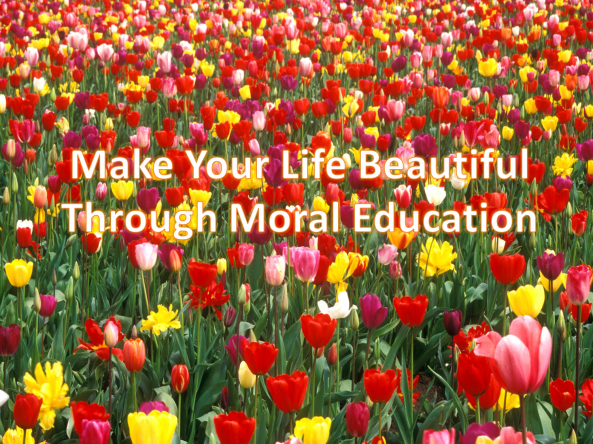 Getting education for good conduct is rare these days. In ancient times, the Indian gurus  taught Ramayana, a story of victory of good over evil. Confucius Analects and Socrates discussions are mostly about good behavior, moral conduct, and principles.

Even the Indian festivals focused on building the right culture. For example, the on-going festival Navratri is for worshipping Goddess Durga, representing feminine power.  Devotees dance in the dandiya night, conduct various pujas and fasts, or understand the deep philosophy behind the concept. The three approaches differ on the same principle as reading pulp-fiction for fun, cramming up a textbook, or reading and reflecting on literature. It is just the third aspect that builds character and critical thinking; the other two are vain efforts without lasting effort.

However, 90% of the crowd focuses on the first two. The challenge lies in shifting the attention of the crowd from superficial and superfluous to serious. Unless solemnity supersedes frivolity, no one will venture for intellectual or philosophical thinking. For instance, previously people labelled geeks as weird, now they have a cool quotient. The tipping point reached when a core mass made a huge social impact through technology.  Somehow, education on moral conduct and principles needs to go viral.

In ancient times, the teachers taught moral conduct in one-to-one or a small group setting. It was the responsibility of the teacher to impart knowledge. They could assess each student’s character – strengths and weaknesses. Now with classroom and web-based training, it is the responsibility of the student to learn. Training moral conduct becomes difficult in such a setting, as the student does not receive any personal feedback on behavior.

Parents focus has changed also. A child spends most of the time in studying technical subjects, playing sports or participating in activities. The assumption is moral awareness and conduct will automatically develop without any specific attention.  Another opinion is that all humans know parenting when they have a child. The rate of depression, abuse, and crime among children clearly show that parenting skills do not come automatically. Therefore, do not assume that all parents will be able to impart moral education to their children.

The plants that are regularly watered in a garden grow; the others die. For moral behavior to flourish there has to be dedicated training.

The right time of moral training is to start at a young age; children mold easily. However, this doesn’t mean older people cannot be trained. When educated adults can be influenced to conduct a crime, join terrorist organizations, then adults can also be educated to behave morally. With the right kind of influencing and training, hardened criminals can also change. Quality of water gushing from a fountain depends on the underground supply of water. Similarly, the quality of human conduct depends on the unconscious emotions and thoughts of a person. Education and cultural osmosis changes the unconscious motivations.

Therefore, the challenge is to refocus thinking and approach to life. In the darkness of night, we realize the importance of light. However, when our life is filled with darkness, some humans move further into darkness, some struggle to bring light back into life. The ones who have had strong moral education are less likely to move into the dark life of revenge, vendetta, and bitterness. They are more likely to get their balance back in their life.

The age-old art of storytelling and Socrates methods can be applied on a mass scale using technology. The initial followers and change makers selection is critical. An artisan can’t carve rotten wood. As a sculptor makes the base ready before sculpting, the moral base of the change makers requires preparation. Then only they can act as effective influencers.

However, one size fits all approach shouldn’t be taken. Trees grow to different heights and bloom in different seasons. Human beings capacity of moral reasoning differs and requires different level of effort to understand the concepts. Hence, training should be provided after assessing the caliber of the person.

Moral education makes a big difference in pursuit of happiness in life. Simply put, if we are moral, we harm less people, don’t participate in unethical activities, and are geared to act in a fair and just manner. This behavior itself ensures that a person makes few enemies, and has good relationships with most people. Sound relationships lay the foundation of a happy life. It is not money, but quality of relationships that leave a deep impact on peace and happiness of an individual. For a lush green lawn, a gardener waters and tends the whole garden regularly. For a fruitful life, don’t ignore moral education.

Wishing all my readers a Very Happy Dussshera.