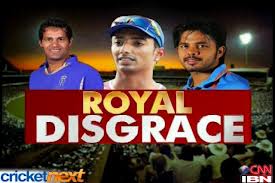 The Story of Disgrace

A wave of shame and disgrace washed over Indian Premier League’s (IPL) Rajasthan Royals team. Three players of the team – S Sreesanth, Ajit Chandila and Ankeet Chavan – were identified as part of the spot fixing racket. Eleven bookies were involved. Investigators have found some evidence connecting it to underworld don Dawood Ibrahim.

As per police disclosure Chavan was paid Rs.60 lakhs by the bookies, Sreesanth and Chandila got Rs.40 lakhs each. By the number of matches they have played they would have earned a few crores each. The bookies lured the players by throwing parties and providing female escorts.

It is shocking that players with such international repute and excellent career opportunities would take a criminal route to earn money. One wonders what they were thinking. Were they joyously throwing up their hands in the air and dancing with happiness. Did they think that for a few millions they would be breaking the hearts, trust and expectations of billions of people, starting with their family?

It is reported that Rahul Dravid, the captain of the team suspected something. He made Sreesanth sit a couple of matches and the team managers asked him to leave the team. How painful it must have been for Dravid, a man reputed for gentlemanly conduct.

This isn’t the first time followers hearts have been broken by their idols.  Now the cancer has spread through all facets of life. Indian politicians – Gandhi, Nehru, and Azad – were known for their impeccable behavior  Congress leaders fought for Indian independence. They spent years behind bars to fight for a cause. Now Indian politicians spend time behind bars for corruption and fraud. Instead of feeling shame or humiliation, they get back into public life with renewed vigor to mislead people and make money.  Over 30% of Indian politicians have a criminal track record.

The new breed, who have joined the infamous bandwagon are senior managers of Indian corporates. After Satyam and 2G telecom scam, their names appear frequently for being interrogated by CBI and spending time in jails.

Valuing Honor in Our Lives

So where has honor disappeared? Previously, the mark of distinction for a man was when people referred to him as – “he is an honorable man”.  Having a dishonorable reputation was disastrous socially and professionally. Now, honorable men among leaders can be counted on figure tips.

As a world civilization, we need honor back in our bloodstream. Without it, humanity will reach new levels of depravity. We require men and women to work dedicatedly to get it back for the sake of next generation, though it is a challenging task.

The cynics will say it is a pipe dream and point out various flaws. The idealists look at the times gone by and wish the same could somehow come back. The practical breed has learnt to work like an automaton to earn a living and look at nothing else.

So where do we get our heroes who will change the world for us?  The heroes have to pay a price. Lincoln, Gandhi and King – were all assassinated because they dared to bring about change. From the first step to the end of their journey they made personal sacrifices. They repeatedly saw failures, their hearts sank with despair and somehow they gathered their strength to walk on thorns again.

In the present world, who would wish to trade the high life, luxuries and comforts for a life full of dynamite?

But unless we do so, we are bestowing the next generation a dangerous life.

So our choice is between our generation and the next. Do we want to look that far ahead?

When we talk about change, our hackles rise. Even when it is obvious that we should change, we don’t want to. That is a human failing which 100% of us have. Our best excuse is that we can’t change the world, who would listen to us, how can all the people change? But if we study change, we just need 10% of the people to believe in our cause. That is, we need to influence just 1 in 10 people in our life. That doesn’t sound very difficult; all of us are capable of doing it. So why not give it a shot, and bring honor back in our lives. I leave you with words of Dorothy L. Sayers from Gaudy Night: