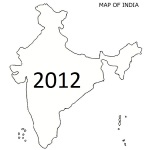 Indian organizations are in for a rocky ride in 2012 as darkening clouds hang over India growth story. In some ways it is a make or break year for India’s continuing successful journey for economic growth and power. The world is watching and India cannot afford to flounder. However, the risks in the economic environment are acting as tsunamis and volcanoes, wiping out past efforts swiftly. This year Indian organizations need to watch out for external risks and triggers carefully, as they can have huge impact on the bottom line of the company.

The prophets of gloom and doom predict that India’s GDP in 2012-2013 financial year will be between 6-7%. In light of prevailing political and economic environment this statement is a conservative realistic assessment. Hence, organizations to sustain and grow in 2012 need to conduct strategic risk assessment of India country risks. I am giving below my top four.

In 2011, Prime Minster Manmohan Singh’s reputation has nose-dived as the country was engulfed in corruption scandals. His continuance as Prime Minster till the end of term is widely debated in political circles. The Congress party is facing another crises due to Sonia Gandhi’s ill-health. Public is speculating that she has undergone surgery to treat cancer in USA. Hence, rumors are rife about Rahul Gandhi  taking over the reigns of the party. Moreover, senior Congress party leaders are having spats in public.

Last but not the least, Anna Hazare’s fight against corruption has awakened the middle class. Finally, they have lost their apathy and are demanding better governance.

Considering all aspects, there is little likelihood of a strong national party leading India in 2012. Moreover, political commentators are hinting about mid-term polls due to fishers in Congress party and it’s deteriorating credibility. Therefore, large organizations must manage political risks at national and local state level. Keep in mind sensitivities of various political parties otherwise their is a probability of getting caught in a tug of war. Also, adjust the growth plans for government ineffectiveness.

Indian markets in 2011 have done badly on financial indicators. There is slowdown in growth and in October 2011 industrial output contracted by 5.1%. Fiscal and current deficit are expected to cross 3% and 5% of the GDP respectively in 2011-2012. The GDP growth forecast for the year was reduced to 7.5% on 10 Dec 2011.

Business Standard reported in its weekly report on 16 December that “The WPI inflation for the month of November came in at 9.11 per cent compared to 9.73 per cent in October. The market was looking at an inflation of below 9 per cent for November. Inflation for November 2010 stood at 8.2%. India’s food inflation eased to 4.35% in the year to December 3 — its lowest reading since late February 2008 — from an annual 6.60% rise in the previous week, government data showed today.

Further, On Thursday, the Indian rupee touched a record low of 54.30 to the US dollar on the back of sustained foreign fund capital outflows in view of the fall in the equity markets, coupled with a stronger dollar in global markets.”

The Finance Minister Pranab Mukherjee recently commented in a meeting – “The present indicators show that both private consumption and investment sentiments have weakened and it is this weakening of sentiments that makes it necessary to shift our focus back to near term issues.”

Moreover, Moody’s in November 2011, “downgraded the entire Indian banking system’s rating outlook from “stable” to “negative,” citing the likely deterioration in asset quality in the months ahead.” Additionally, aviation, telecom, commercial real estate and power utilities industries collectively owe banks Rs 5 lakh crore. These industries are most affected by the slow down.

The financial market situation is unlikely to improve in the short run. India will most probably not see a double-digit growth in GDP in 2012-2013. Companies need to risk adjust the financial growth numbers keeping in mind the prevailing situation. . Conservative estimates and cost control will steer the organizations in safe waters. Maintain good liquidity throughout the year as banks are not going to save organizations in a crunch.

The regulatory reforms came to a standstill in 2011. The business leaders came out strongly criticizing the political parties for hampering economic growth. The unhappiness of corporate world is evident that investments – domestic and foreign – are at an all time low.

This shows the pending backlog of bills requiring approval in the parliament. Business leaders are likely to lobby for approval of these bills in 2012. Hence, risk managers need to be geared to manage numerous regulatory changes in 2012.

In light of various scams – telecom, mining, land, etc, – the corruption perception index in 2011 has fallen to 3.1 from 2010’s 3.3. India’s world ranking in corruption has gone lower to 95 from a total of 183 countries assessed. This is not surprising as Indian’s in 2011 saw well known politicians and business owners implicated in scam cases.

The recently released report of Global Financial Integrity – Illicit Financial Flows from Developing Countries Over the Decade Ending 2009 – states that trade mis-pricing accounts over 80% of the illicit financial flows in Asia. India in the last decade lost US $104 billions in illicit flows and is ranked 15th highest among developing countries with China topping at US $ 2467 billion. Though in comparison to China, India doesn’t appear to be doing badly, but that is distorted reality. A couple of activists and whistle blowers lost their lives during the year for uncovering corruption cases.

In 2011, Anna Hazare initiated public rallies to force government to pass Lok Pal Bill. Although, parliament is expected to pass it in December 2011 winter session, the implementation will take some time. The government’s sincerity in eradicating corruption is questionable as the various anti-graft bills are being used to play political football. The UPA government to counteract Hazare’s war cry has presented three additional anti-graft namely –  Judicial Accountability Bill,  Public Interest Disclosure Bill (Protection to Whistleblowers Bill) and the Citizens’ Charter – in the parliament in December 2011. A step in the right direction but the road ahead is tough. Passing bills and implementing them are different ball games.

In light of the fraud cases, high-level prosecutions and political games, the Indian corporate world has become vary. In 2012, organizations must focus on implementing a code of conduct for employees and provide training to them on business ethics. The legal and reputation risks will be extremely high if these aspects are ignored.  The situation becomes more tricky for US and UK multinationals as they are governed by FCPA of their respective countries.

Political deadlock, inflation and corruption have taken the air out of India’s growth story. 2012 will be the decisive year in assessing whether India can surmount these obstacles and accelerate economic growth or  go on a downward spiral. Organizations must maintain a balance between growth and risks. The downside risks can cost heavily and there may be no quick ways to turn around numbers. Hence, doing proper planning, implementation and cost effective operational execution are key for success.