The Gen X and Gen Y of Bangalore thought as cosseted and pampered employees are out on the streets protesting against corruption. A few days back if anyone would have asked  whether the Bangaloreans working in world’s largest organizations will leave their air-conditioned offices, laptops, ipads and blackberries to fight for corruption, the answer would have been no. The unimagined has occurred. One has to see it to  understand the magnitude. Employees working in multinationals are standing on the main roads with posters and pamphlets educating the public about Anna Hazare’s fight for Lokpal Bill. 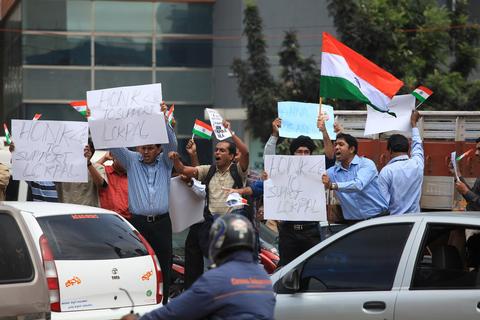 Normally, people who wouldn’t think of getting out of their air-conditioned cars in the Bangalore traffic , are braving the pollution and traffic to get their voices heard.  The tech savvy are using personal resources to build the momentum.  Local leaders have created groups and fan pages to build awareness, discuss issues and plan out events. The street protests have a huge turnout. The whole of last week, people started at around 9 a.m and continued late in the evening. I live near Outer Ring Road that has offices of Accenture, Intel, JP Morgan to name a few. Employees are coming out of their offices in lunch hour to support the initiative.. Here are some of my group members India Against Corruption – Bellandur (IAC- Bellandur yahoo group) protesting. 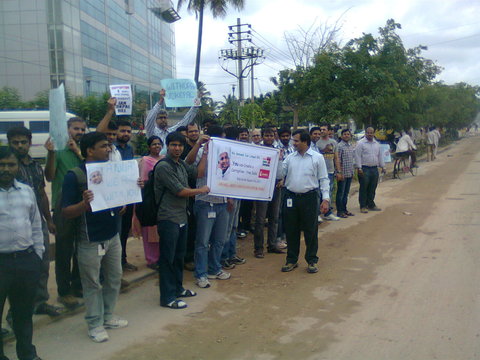 Women are participating in huge numbers. The ever-protective Indian moms have forgotten their fears and the kids are taking part in the movement. Nobody wants to miss out on history being made. The fight against corruption started by Hazare has united India. For once class, creed, religion and caste are forgotten and everyone wants to do their bit. 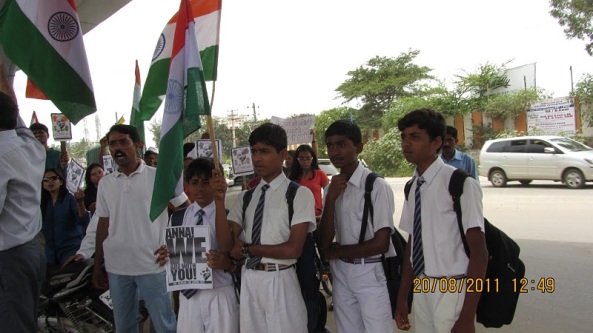 Of course, not all are sold on the cause. The cynics are predicting that all will die down soon. The dissenters are saying there isn’t sufficient critical mass to bring about a change, public living in a democratic country shouldn’t protest like this and some more similar statements.  My view is every drop in the ocean counts. Even if 10% of Indian population participates, society can change.

The impact is significant. Delhi police reported a 35% drop in crime rate in last week with no murders. The city has around 6-7 murder reports on a daily basis, and in the last week there have been none. This is when Indian public is at its most vulnerable and are soft targets.  Though many may view the data skeptically, in my view there is hope. Indian youth turns to crime due to high level of poverty and corruption. When there is no ethical way to earn a living, they resort to crime. Maybe, just maybe, the hardcore criminals are also giving the Hazare movement support to succeed. Even their conscience says that it is the right fight. Everybody wants to lead a dignified life and here is a chance for humanity to succeed.

I know as an ethics and risk manager, in India fighting against corruption is a damn though fight. It is very rare that one can win a popularity contest. In most cases, even in organizations the ethics manager is a lone warrior. Frequently, the business executives consider ethics managers as idealistic impractical fools. Ethics managers simply become paper pushers and their viewpoints a few times in life are in majority of one. But maybe it all is changing. We can curb the demand and supply side of corruption. The ethics managers can don the caps of organization change agents and educate staff on anti-bribery policies and practices. This is the right time to build an ethical culture within the organization.

For me, it is a time to start dreaming again. If a few weeks back someone would have asked me that – can corruption be eradicated from India? I would have responded –not in this lifetime. Now what I thought was a futile dream, may turn into reality.

I invite you to join us on 24th August 2011 at Outer Ring Road, Bellandur, Bangalore between 11 am to 2 pm to participate in the protest. Let’s make a difference while we have the opportunity.

DNA e-paper published this post under a different title“Tech Talk to Topi Talk” on 29 August 2011 on page 7.