Be faithful in small things because it is in them that your strength lies.” Mother Teresa 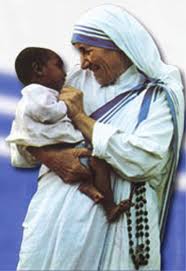 This week the world celebrated Mother Teresa’s birth centenary. She lived a life of sacrifice, love and kindness. She showed a commitment to uplifting society which very few leaders have been able to demonstrate in the last century. I thought the best way to celebrate it would be by building awareness on a subject closest to her heart.

This post is dedicated to learning lessons from her personal commitment to social responsibility. It highlights that her work needs to be continued on a larger scale as a quarter of Indian population is still below poverty line.  I hope by building awareness we can encourage individuals and corporate to commit to social responsibility and do their bit for the world.

Commitment to a  cause – In 1950, Mother Teresa branched out from the main church and started her own diocesan congregation which subsequently became Missionaries of Charities. In her own words the purpose of Mission of Charities was to care for “the hungry, the naked, the homeless, the crippled, the blind, the lepers, all those people who feel unwanted, unloved, uncared for throughout society, people that have become a burden to the society and are shunned by everyone.”  She built the foundation from scratch and in her lifetime there were 610 missionaries operating in 123 countries being managed by more than 4000 nuns. She dedicated her life and energy to providing loving care to the homeless and sick all around the world.

Crises of faith – In her letters to the mentors of the church she had written about her self-doubt about her mission and the existence of God.  In one of her letters she wrote “Where is my faith? Even deep down … there is nothing but emptiness and darkness … If there be God—please forgive me. When I try to raise my thoughts to Heaven, there is such convicting emptiness that those very thoughts return like sharp knives and hurt my very soul … How painful is this unknown pain—I have no Faith. Repulsed, empty, no faith, no love, no zeal, … What do I labor for? If there be no God, there can be no soul. If there be no soul then, Jesus, You also are not true.”

These letters show her despair on the task she had set out for herself. In India, in those times 90% of the population was below poverty line (according to World Bank estimates). After seeing so much suffering and pain on a daily basis her efforts to do good for humanity must be appearing minuscule to her. Her courage and commitment carried her through all the doubts. She despite the crises of faith continued her efforts to give relief to the poor.

Persevering through criticism –Mother Teresa was bestowed many awards in India and internationally. She received the Noble Peace Prize and Bharat Ratna (the highest civilian award of India) for her humanitarian work. Gallup polls indicated she was the single most admired person is USA for a number of years in 1990’s and the most admired person of the 20th century.

With the recognition came the criticism. Her critics blamed her for lack of transparency and mismanagement of funds, stating that the funds were used to create more convents instead of eradicating poverty. Other allegations were that she accepted donations from people with questionable reputations, did not provide proper medical help to the patients, ensured nuns compliance through punishment, etc. Some people even questioned her theology and stated that she fantasized poverty. Without doubt as any other human being she may have made some incorrect decisions in her life. She endured all the criticism and persevered by doing humanitarian work. Her actions spoke louder than the words of her critics.

Considering that Mother Teresa dedicated her life to improve the life of the poor in India, the question comes up – How is India doing now?

Some Hard Facts About India

Further, the 2010 list of Forbes Asia’s Heroes of Philanthropy contains four Indians. India was ranked fourth in the 2009 list of Asian countries increasing importance towards social responsibility. This was released by Forbes magazine in October 2009 and the listing was done according to the social enterprise CSR Asia’s Asian Sustainability Ranking (ASR).

Income disparities are extremely high in India. As per the 2005 estimate, World Bank has stated that 42% of Indians are below the international poverty line. In numbers this equals to 456 million Indians.   The Planning Commission of India estimates indicate that 27.5% of Indian population was living below the poverty line in 2004-2005. The discrepancy in the World Bank and Planning Commission of India is explained by the purchasing power of dollar and rupee.

The Economic Times (Indian financial newspaper) study showed that total donations by listed companies were US$ 170 million in financial year 2009. This indicated an 8% growth in comparison to previous year.

The figures clearly indicate that Indian business houses and high net-worth individuals are not contributing a significant portion of their wealth for charity and social causes.

Bill Gates and Warren Buffet amongst the world’s richest men are partnering to create the world’s highest funded charity. Warren Buffet will be donating to The Bill & Melinda gates Foundation funds amounting to approximately $30 billion. They are inviting more American billionaires to publicly commit more than 50% of their wealth to charity before or after their death.

A 2001 study indicated that “the assets of the three richest people in the world was more than the GNP of the 48 least developed countries, and the three richest officers of Gates’ Microsoft had more assets (upwards $140 billion) than the combined GNP of the 43 least developed countries”. In 2009, The Bill & Melinda Gates Foundation donated USD 300 million to health causes which was higher than USA’s donation as a country. This clearly indicates that people can do more than the countries since they are not bound by the political protocol. They just need the heart and spirit to share their wealth.

We need organizations and people to join hands to work towards a better world. With the disparity in incomes increasing, we need to learn Mother Teresa’s generosity of spirit. Our effort might be just a drop in the ocean, but it counts to the person who received it. So let us not get discouraged by how small our effort is. The cumulative sum total will be huge. In Mother Teresa’s words- “In this life we cannot do great things. We can only do small things with great love.”

A final salute to the woman who showed the world what a person could do to improve the world if he/ she sets his/her mind to it.

6 comments on “Mother Teresa- An Inspiration For Social Responsibility”

This publication contains general information only and is based on the experiences and research of the author. The author is not, by means of this publication, rendering business, risk management advice, or other professional advice or services. Before making any decision or taking any action that may affect your business, you should consult a qualified risk manager. The author gives her permission to link, post, distribute, or reference this article for any lawful purpose, provided attribution is made to the author. The author can be reached at jaspal.sonia1@gmail.com